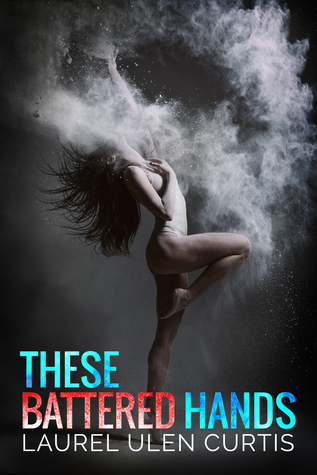 Firstly, I want to say that I have a cover crush on this book and that's what first drew me to the book, second was that earlier this year I read the author's book Quirks and Kinks and found it a fun read and then last , but not least the book is about gymnastics and I have a thing about reading sports orientated books. These Battered Hands was an amazing read and shows the inner lives of gymnasts, especially those who like the main character Callie are twice Olympian winners and aiming for a third at only 26 is amazing. Growing up , I loved watching The Cutting Edge movies though the films are about Ice Skating, I found them similar in theme and the way the book was written. In These Battered Hands, Callie is given a new coach called Nik who is around her age and a hunk. The pair of them , though they get off to a rocky start - they work wonders together and there is passion and chemistry sizzling and they begin dating in secret as if her father catches him - he would be fired and also blackballed as a coach and her integrity would be compromised as in the rules of sport everyone knows dating the coach is always off limits. Callie has never met anyone like Nik before and at 26 , she is at the stage of needing to feel appreciated and loved and Nik does it for her in more than one way. Can Callie have both - her gymnastics and Nik or will she have to sacrifice one for the other ? With her whole life riding on the Olympics, she gives up Nik but what will happen when tragedy strikes ? Will Nik be waiting by her side or by pushing him away, has she lost him forever ?
These Battered Hands is an awesome read and one that those who have been talented in a specific area, which means that they haven't had the chance to be social will understand as in order to succeed and be the best, often sacrifices have to be made .