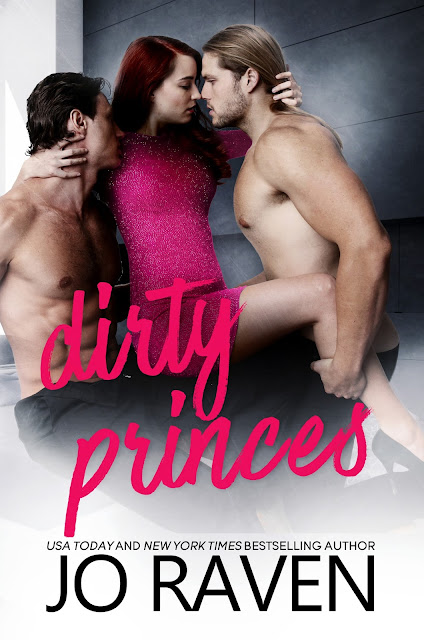 Once upon a time, there lived a princess called Brylee who had a cat and a steady job and her eye on a handsome prince.
But Prince Ryan refused to put out. So she baked cookies and buttered muffins, without any double meaning whatsoever, and saved her cherry for her prince.
Who was being difficult and not following the damn script.
Then Riddick walked through the door and ate her cookie.
Literally, okay? It was a good cookie, too, with chocolate chip.
Riddick is drop-dead gorgeous, but not a prince. Regardless, Brylee can’t fight that burning attraction.
Even when Ryan does a turn-about and starts showing interest in her, after all this time.
This isn’t how things were supposed to happen. She was supposed to get a prince, not get caught between a hot prince and a hunky pauper.
Come on.
Especially not when said prince and pauper can’t stand each other.
Brylee isn’t above letting two men fight for her. That’s the essence of a good fairytale, right? A fight, a winner, a grand wedding and a happily ever after.
It’s fine. After all, she doesn’t want them both.
At the same time. In her bed. Like, ever.
#FamousLastWords

Reconnaissance.
With a wink at Simone, I get up from my rowing machine and grab my towel, then make my way toward him.
This is a huge gym, new, the machines gleaming, the people dressed in trendy exercise clothes, their MP3 players flashing as they move. Strong, lithe bodies, with barely any hint of sweat.
Self-consciously I adjust my top. It’s like everyone passed an exam to enter. It makes me wonder how Simone and I made the cut.
Not that I don’t take care of my body. I sure do, and I even drag my best friend Candy along when she’s not too busy having wild sex with her two boyfriends.
Two. Boyfriends. Did you catch that?
Total overkill if you ask me. And still no idea how she did it. I’ve been trying to get one guy—Ryan—for the past year, one—and still no dice.
It doesn’t matter. It will be worth it in the end. Not everyone gets their soulmate on the first try.
Or the hundredth, for that matter. Hundred-and-twenty-fifth to be precise. Hey, it’s a good number. These things take work.
And I do work it as I approach Ryan, as Simone advised me to do after watching Pretty Woman, swinging my hips and lifting my chin, letting my ponytail swish against my back.
He’s getting ready to start, draping his manly black towel on the seat of a rowing machine and… whoa.
Red alert. His T-shirt molds to an impressively sculpted chest and set of shoulders, his corded arms in full display, a picture straight out of Men’s Health magazine.
Holy guacamole.
Woo.
But of course I shouldn’t be shocked. I chose him. He’s everything a man should be. He just has to see I am the girl for him.
That’s why he’s single. He’s been waiting for me all along.

Jo Raven is a New York Times and USA Today bestselling author, best known for her series Inked Brotherhood and Damage Control. She writes edgy, contemporary New Adult romance with sexy bad boys and strong-willed heroines. She writes about MME fighters and tattoo artists, dark pasts that bleed into the present, loyalty and raw emotion. Add to that breathtaking suspense, super-hot sex scenes and a happy ending, and you have a Jo Raven® story.

Find all her books here .

Be the first to get your hands on Jo Raven’s new releases & offers, giveaways, previews, and more by signing up here