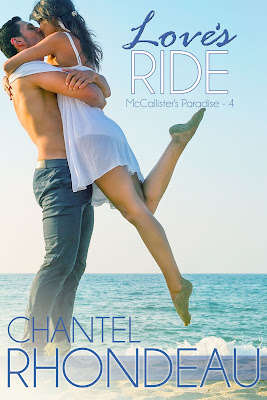 Brad McCallister has always felt estranged from his family. He thought taking over as manager of their paradise resort would make him feel more connected but that hasn’t happened. To top it off, his siblings are finding life partners and settling down while Brad’s still single. If only he could stop obsessing over the island's psychologist, Chelsea Taylor.

Chelsea loves working at McCallister's Paradise. She enjoys the large family of employees and feels at home in the sand and sunshine. The only thing missing is the spice of adventure. She longs to explore the island and conquer her longstanding fears.

After Brad’s sister schemes to bring Brad and Chelsea together things go horribly wrong, but Brad refuses to give up without a fight. A two-week island adventure will not only help fulfill Chelsea’s lifelong dream of being a survivalist, it will give them a chance to get to know each other—away from his meddling family.

This couple gets more than they bargained for when survival takes on a new meaning in paradise.

She pouted slightly as she thought, her full red lips begging him to suck on them. “I felt like dinner went well the other day, but…” She paused and scarlet flared against her cheekbones.

“Dinner did go well,” he agreed. “I wasn’t sure you thought so, but I had a great time.”

“I was surprised when you left so fast.” Looking down at their hands, she avoided his eyes, seeming unsure and flustered. “I thought you’d want a goodnight kiss.”

She felt insecure because he hadn’t kissed her? Well, hot damn!

Brad chuckled and tugged her hands, pulling her close to his chest. She was enough shorter than him that when her hair swished around her face the silky strands rubbed against his chin, catching slightly in the evening stubble he hadn’t had time to shave.

Pressing his lips against her forehead, Brad released one of her hands to caress her cheek and slide his hand down her neck.

The passion he felt in being so close to her was echoed in the soft trembling of Chelsea’s body against his and the sweet, contented sigh she released.

Wrapping both arms around her, Brad held her close to his heart, enjoying having her so near after spending several days apart. If only work would slow down and he could see her more often. He knew it was too sudden to be sure that he wanted things to work out with Chelsea, but holding her felt right. Since the moment she arrived on the island, Brad hadn’t been able to stop thinking about her, wishing he could call her his lady. Now he might have a chance.

Chelsea’s arms circled him, and she rested her head on his shoulder. The soft puffs of breath coming from her mouth bathed his neck with their warmth, making him wish he were less of a gentleman.

If he didn’t stop this soon, the problem twitching to life in his pants could make a family dinner awkward. Kissing her forehead once more, Brad gently gripped her shoulders and pushed her away. 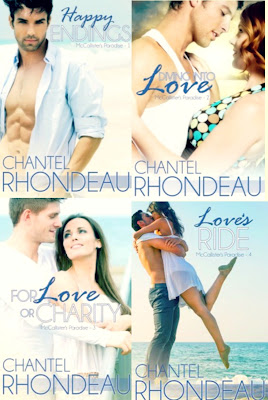 Fall in love with the strong men and smart women of McCallister's Paradise!

At their tropical island resort, the McCallister family works hard. Life in Paradise should be perfect. After all, the place is great for a romantic getaway. Unfortunately, the five McCallister siblings are still searching for their happily ever afters... and romance always seems just out of reach.

But determined hearts won't be denied. And when love is on the line, a McCallister doesn't fall halfway! 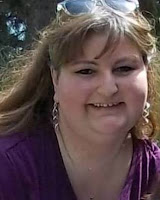 Bestselling Author Chantel Rhondeau once thought a mystery or fantasy book with strong romantic themes was the highest level of reading bliss. After reading her first romantic suspense, she never looked back. Chantel is author of six romantic suspense novels, three Christmas novellas, a sports-themed novella, and the McCallister’s Paradise contemporary romance/family saga series. She lives in the western United States and when she's not writing, she loves playing cards with her family, bowling on leagues, and snuggling with her lazy kitties.