Review: Because of Lila - Abbi Glines 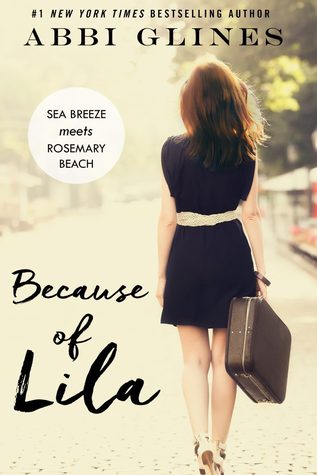 I have to admit at first I was a little confused until I clicked that the characters in this book are like Next Generations of the OG Seabreeze and Rosemary Beach series and then I got all giddy as I started to pair up the children to the parents and was like awh, they had this many children and yay, so glad the romances got a HEA for the parents . The main love triangle in this book is between Lila, Eli, and Cruz. Lila is the daughter of Harlow and Grant, Eli is the son of Marcus and Willow, and Cruz is the son of Woods and Della.  Lila has always been the good girl and sheltered one living in Rosemary Beach with her friends and the guy she has always wanted but is such a jerk and a player - Cruz Kerrington. One morning, she decides that enough is enough and decides to run away and stay with her best friend Nate and his partner Bliss in Seabreeze. Nate is the son of Rush and Blaire, and Bliss is the daughter of Eva and Cage. Are you still keeping up with the family trees? While in Seabreeze, Lila lets loose one night and ends up having a one night stand with none other than Eli Hardy. The thing is the next morning, he can't remember a single thing that happened and for Lila - she just lost her V card to Eli. This causes a bit of a chaotic next morning as turns out Eli is Bliss's best friend and in head over heels love with Bliss, but if he can't have her, then he will have the next best thing - Lila. However, someone else wants Lila and won't stop till he gets her right where he wants her on the back of his motorcycle and in his arms - enter Cruz Kerrington who has come to profess his love for Lila, but she won't be swayed that easy. A significant part of this book I loved was their trip to New Orleans as reminded me of my week there; I also loved the reunion of all my favorite characters from the two series. Which guy will Lila pick - will it be Eli Hardy or Cruz Kerrington? Find out in Because of Lila by Abbi Glines.