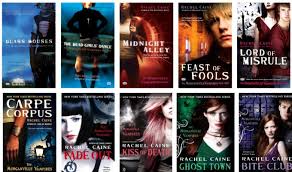 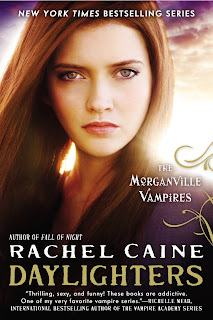 Is this the end of the Morganville Vampires series ? A Series that I have been reading for quite a number of years "sniff, sniff". I always find it quite fascinating how sometimes a series can have so many books and you get so involved in it , you can't believe that it's been that many books. In Book #14, we read as Claire finally left Morganville but it wasn't to be for very long as her friends came back to let her know trouble was a rising in Morganville. Upon arrival in Morganville though , it wasn't a happy one as Michael, Myrin, Jesse and Oliver have all been staked and carted off to a quarantined facility and Claire, Shane, Eve and the evil Dr. Anderson have been taken to the police station. It seems that there's a new party in town and are trying to take over Morganville - an anti- vampire group called the "Daylighters' and their logo is a sunshine pin. It also seems that this group has a cure to reverse the Vampiric states of the vampires , however only few are surviving from the change ? What will happen when they inject this cure into Michael ? Will this be the end of Michael Glass to finish off the series ? Also will there finally be wedding bells chiming when Shane asks Claire to marry him ?
Find out in Book #15 of the Morganville Vampires series "Daylighters".