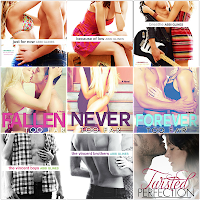 Yes, something that I have to confess to is that I am a reader who reads things more often than not out of order and to be honest it's not deliberate either. It just seems to happen that way. For some reason, I had thought that I had read all of the Too Far series but turns out that somehow I missed Book #2, so I decided to finally go and read it. It did explain a lot too as it turns out that in this book we discover that Nan's father isn't in fact Blaire's dad after all and that their mother lied and well ... she's a slut . Her father turns out to be Rush's father's band mate Kiro who already has another daughter called Harlow and we all know that Nan likes to be the center of attention.  Blaire unable to put up with Rush or her father, heads back to Alabama and settles in with Cain's grandmother seeming as she has no-one else and discovers that she is pregnant and Rush is the father. Will Rush and Blaire be able to get back together or will Nan try and step in the way again ? At least , Blaire has her best friend Bethy and Woods to hold her hand and help her get back on her feet ? . Will the baby give Blaire and Rush a new perspective on life and the meaning of what "real family" is and should be like ?
Find out in Book #2 of Abbi Glines's Too Far and Rosemary Beach Series and I can't wait to read her new upcoming release Take A Chance.