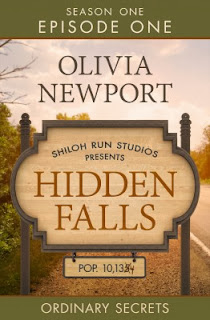 I'm always in two minds about Serials as it makes me wonder if A) the author being greedy and wanting to make more money by writing it separately and B) why would an author have it as a serial and not a full book ? . The thing though I do love my books and more often than not I have brought serials as I want to read the story and they are quick reads. From Christian author Olivia Newport, she has released a serial called Hidden Falls which eventually will have 13 episodes but currently she has only released 5 episodes.
Ordinary Secrets is the start of the serial and is Episode One. This is where we get to know the characters of the story and the setting and backstory. Hidden Falls is a small community and they have all gathered in town for a banquet hosted by the Mayor Sandy for one of the communities pillars - History Teacher Ted Quinn who has touched many a-lives. In Ordinary Secrets we meet a few of tonight's guests and how their lives have intertwined with Quinn's and how he has or will help influence their lives and are the people they are today or will be.
This episode finishes on a cliffhanger with an explosion in the school hall where they are gathering and of course when the explosion clears - the guest of honour cannot be found .Where is Ted Quinn and why was the explosion planned for this special occasion ???
Find out in this quick introductory to the serials with Episode One: Ordinary Secrets by Olivia Newport and stay tuned as later on , The Phantom Paragrapher will read and review the other books in the serial.