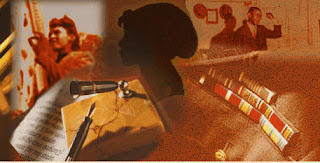 Review: Homecoming Weekend - Curtis Bunn - September 2012
Being in New Zealand , we tend not to make a huge deal of things like Homecoming etc , to be honest I don't even know if we celebrate it. When I saw this book available for review, I thought hmm this could be fun as I had seen movies with the american college Homecomings e.g Gilmore Girls , read a number of books with the topic and have enjoyed the whole thought of a college or school reunion. Homecoming Weekend is set at Norfolk State University , an all black school in the novel. Homecoming Weekend for schools like this is more personal than big colleges and is a strictly no-spouse zone especially if that spouse didn't attend NSU. We meet a variety of characters from Jimmy , whose ready to have the time of his life and escape from the drama of his wife Monica.  Carter , a divorcee who has been having an affair with fellow former student Barbara for the last five years . He hopes to spend this weekend with her , but will he be supportive when he learns that she has left her husband for him and has made a move to New York to be closer to him ? Or will this ruin their affair as it bursts his no-strings attached fantasy ? Don, Jesse and Venita are on their way to the Homecoming Weekend when they are pulled over and it seems that Jesse's license has been suspended and he can't drive over state lines . Will the threesome make it to Homecoming Weekend and get to the bottom of the case of mistaken identity ? Tanisha hasn't set foot on the campus since the day she graduated, is she ready to face her past ? What will happen when the one guy she had a crush on turns out to be married to her University arch-nemesis Felicia. Will this be the time to finally get even with her ? Or has Tanisha captured the eye of ex-university boyfriend Michael's cousin Kwane ? Has love given Earl and Catherine a second chance to bloom ?
There is nothing quite like homecoming. It is a combination of a massive family reunion and festival, a sentimental and reaffirming annual experience that is laced with rekindled romances from years gone by, weekend flings and surprising revelations. Bunn paints high-definition images of the events as he takes you on the odyssey of five sets of friends back at their alma mater seeking satisfaction in different fashions. And while they arrive anticipating one thing, they end up with realities that place them in moral and ethical dilemmas—and the resolutions are as satisfying as a warm embrace from a dear old friend.
Homecoming Weekend is a tale that is told from a variety of point of views and so if you are not one for lots of characters, like myself you may struggle with it but if you love the variety and/or have experienced your very own Homecoming Weekend, then Curtis Bunn's new book is for you .