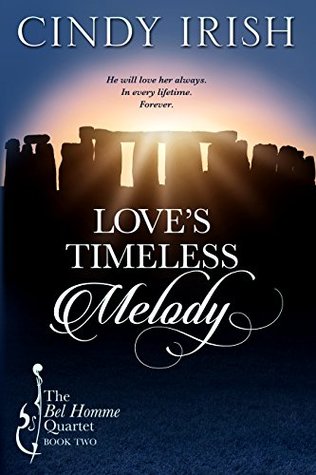 In this mystical, sexy contemporary romance, Cindy Irish invites you to fall in love with another sexy Bel Homme superstar, Jamie Stratton. Jamie is raking in the money and fame but beneath all the lights and accolades, something’s missing. After a tragic accident, Psychic Medium, Jessica Evans, is hiding from the world, trying to find quiet comfort in the hills of England. Too bad fate has other ideas. When time and attraction bring Jamie and Jessie together, will they be able to find true love’s melody? Or will dangers in their lives kill the music?

Join Cindy Irish and the Killion Group as we celebrate the release of Love’s Timeless Melody with this 24 stop Book Blast from February 8th to 12th. Included in this book tour is exclusive content, guest posts from Cindy, a spotlight of the book, and a giveaway. One GRAND PRIZE WINNER will receive a $100 Amazon Gift Card!

Follow the book tour to all of these participating blogs:

Synopsis:
Opera gets magical!
The Bel Homme Quartet saga continues in Book #2 with this mystical standalone story…
British member Jamie Stratton joined the world famous pop-opera singing group called “Bel Homme” for one reason only: money. It’s a year later now, and he’s rolling in it. But Jamie also possesses a spiritual side he can’t deny. He was raised by his gran at the most legendary place on earth: Stonehenge. She manages the gift shop there, and Jamie grew up in the flat over the store. His grandmother is an eccentric old bird who reads her Tarot cards and predicts true love is coming into Jamie’s life.
Jessica Evans is an American psychic medium from Illinois who’s always believed in astral protection—but then she’s assaulted by a man who does devastating harm to her family. While she lies near death in a coma, she dreams of a stranger who is her destiny. When she finally wakes up and needs a safe place to heal, a hometown tie to the American member of Bel Homme gives her access to the group’s secure compound in Royal Tunbridge Wells, England.
That’s when Fate steps in and brings Jamie and Jessie together. But in the midst of their timeless romance, Jamie must deal with a crisis involving his grandmother while Jessie is once again confronted by her brutal attacker—and Jamie is the only one who can save her.
Love or money: which would you choose? It’s Jamie’s turn to decide.

Excerpt #2:
“Put your fingers inside me, Jamie. Take that awful memory away.”

In response, Jamie cradled her cheek and brushed the corner of her mouth with his thumb. Then he glided his hand over her shoulder, down her arm, and over the swell of her bare hip, where he paused and squeezed into her flesh. His simple words were his only truth. “My whole life has been lived for this one moment, this real first time.”

His fingers as gentle as the airy stroke of a hummingbird wing, he skimmed over the surface of her tummy. Covering her mound, he gently combed his fingers through her hair and explored the slippery terrain while his eyes never left her face. Staking his claim, he began. “Yes,” he murmured, urging her on. “Yes, that’s it. That’s it.”

Still keeping up his teasing in-and-out motion, he added his thumb to the rolling action and made tiny circles where he knew she’d love it most. He moaned, provoked to the edge of his self-discipline and feeling close to exploding himself—but still, he kept his rhythm. He didn’t stop. He couldn’t stop. He didn’t ever want to stop doing this with her—to her. His breath came fast, but he never looked down. He just kept working her, inside and out. “You are delectable. Sexy. Perfect.”

Jessie gripped his powerful arm and followed the motion, the ebb and flow he was orchestrating just for her. He slid into her, then slipped out, letting his thumb create the most rapturous interplay. She gasped out loud now. “Jamie.” Heaving tiny breaths of yearning, she was beyond caring she’d lost control. “Jamie!”

“For you,” she heaved out as she came around his loving hand, her hypersensitive nerve endings exploding in pleasure over and over again. Throwing back her head, she went spinning—soaring out of herself—although she was steeped in every physical sensation a man could make a woman feel.

Lifting her hips, she gasped out her bliss to all the vast energy here. The vibrations peaked, then settled, and when they stopped, so did he. His oh-so-gifted fingers stilled, inside and out, and then rested in the pocket of her spent body. “Thank you,” she whispered as her former agony dissolved into the ground.

Slowly, Jamie withdrew and lay on his back, the air a blur because he was breathing so hard. “Pull up your panties and jeans, luv.” After she did, she rolled into his chest, and he gathered her close. He squeezed gently. “No more bad memories, okay? Now there’s only me.”

Jessie rooted around his neck with her nose. Kissing his burning skin, her entire being acquiesced…inviolably healed. “Yes. From now on there’s only you.”