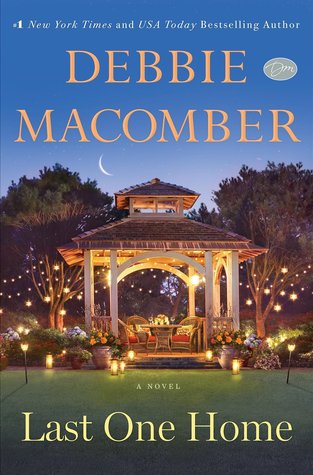 I've never too be honest read or wanted to read a Debbie Macomber book , but my mum had always been a big fan of her series but they never in the past had seemed to grab me. However reading Last One Home has certainly changed my mind as from the very first page, I was drawn into the book and story and could not put it down. We first meet a family of three girls Cassie, Nichole and Karen who are inseparable until they get older and Cassie runs away from her family to marry Duke - a man they disapproved of. As the years passed, Cassie ended up in an abusive relationship with a daughter and eventually Duke was out of her life and she was free. By the time she was free though, her family were no longer part of her life and then her parents died and everything just sort of drifted away even further. Now Karen - Cassie's older sister has reached out to say she can have some of their parent's furniture if she can collect it. For Cassie , this is a light shining as she has also recieved news that they have been accepted for a Habitat for Humanity home. This part I really loved and it struck home for me as we have a Habitat for Humanity house which we helped put in the hours for - mainly my parents did the work but I helped along with bits and bobs. As the book goes along, we are shown that no-one has the perfect relationship, no matter how hard they try to keep it a particular way and it showed me that out of all the sisters - Cassie was the most impressive to be honest for what she had gone through and her sisters just acted like spoilt brats, not letting her explain. Last One Home by Debbie Macomber shows readers that in order to move on with lives, you have to be open and forgive as that there really are shades of grey in lives as not everything is as it seems. If you love family sagas with a slight hint of a chick lit/ womens fiction feel then readers you will love Last One Home by Debbie Macomber.