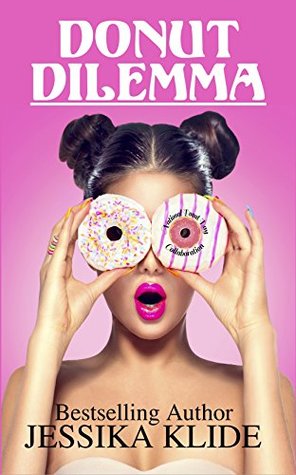 Review: Donut Dilemma - Jessika Klide - June 2018
Since Farrah's little sister loves Donuts and Farrah is in need of a summer job, she gets a job working in the local Donut shop. It's at the Donut shop, where she meets Mr. Mysterious Doctor Cade whom she met the night before when she was drunk out of her mind with her best friend. They exchange numbers and flirt a bit. The donut shop though ends up being owned by none other than Justin. He went to school with Farrah and to be completely honest, the pair of them had crushes on one another but never acted on it. He also flirts with Farrah and soon Farrah finds herself in a bit of a Donut Dilemma as she in love with both of the guys for different reasons. One night she gets a text from an unknown number and she starts heavily flirting and sexting. Over the course of the novella, Farrah has narrowed the mysterious number as either the Doctor #Dominant or her new boss Justin #Delicious. The thing is she is unsure which one it is and despite her trying to figure out, she can't. Soon though Farrah is torn as she loves Justin but doesn't want to give up her mysterious texter as he makes her feel alive and has brought out her kinky side. Will Farrah be happy when the mysterious texter is revealed at the end of the novella? Find out in this quick romantic read, a bit of a Donut Cinderella story - Donut Dilemma by Jessika Klide.