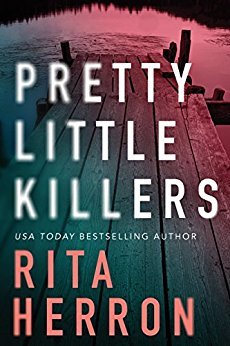 Korrine Davenport is back in the Savannah team of FBI agents and has been paired up with Agent Hatcher. The two of them have baggage as the night that Hatcher's wife Felicia was murdered, he was having a one night stand with Korrine.  Korrine has been dodging her hometown as it brings back nasty memories of the night her father was killed while they danced together when she was five years old.  In Pretty Little Killers, we see a group of criminals who have been let off or mistrials being murdered. Does the FBI team have a vigilante killer on the loose? This leads the agents to Tinsley's cottage where she has been an agoraphobic since she almost died at the hands of a serial killer called The Skull. The Skull's partner was the one who killed Hatcher's wife. Tinsley's therapist advised her to start up a blog as a cathartic journey called Heart and Soul where she can journal her feelings and in a way it has been helping others confess their darkest nightmares. A group called The Keepers have spotted the blog and are getting justice where the "regular " system failed and taking matters into their own hands. What happens when the Keepers get too close? Will Korrine find out the true identity of who killed her father and will she learn the man she loved and admired was nothing like she believed? A warning to readers : some of the murder scenes and confessions on the blog are quite graphic and emotional.
Find out in this Southern Mystery Crime series "The Keepers" by Rita Herron.