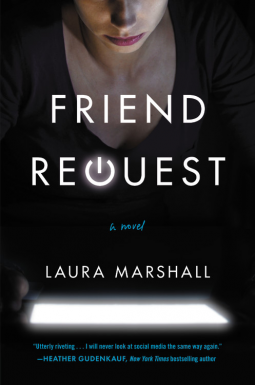 I was in the mood for a mystery read, and Laura Marshall's debut captured my attention with the title Friend Request. As we live in a technology based world, it makes sense that Social Media tools make its way into mystery novels.  This book is set in 2016 but flashes back to the class of 1989.  It starts with the present time and Louise getting a Facebook friend request from Maria Weston. The photo is taken from the profile is their high school photo but it can't be Maria can it as she died during their last year of high school in 1989. Louise flashes back to her first meeting of Maria Weston and how Maria wanted to fit in, but the girls made it difficult for her. As the book progresses someone is sending Louise messages and taunting her, is it Maria or is someone wanting to toy with her? During the book it is also the ten year High School reunion and Louise has shown up as is her ex-husband Sam and their group of friends. Louise was best friends with Sophie back in school, and it looks like Sophie was sent the same friend request. What will happen when one of Louise's classmates is found murdered the morning after the reunion? Has someone come to exact revenge for what happened to Maria Weston and as we go further into the novel, we find out the truth about what happened that fateful night of the 1989 Leavers party and who saw Maria Weston last that night she disappeared? If you are in the mood for a good mystery using Facebook and High School Reunions, then check out Friend Request by Laura Marshall today.