- July 20, 2018
Check out this excerpt of JUSTIFIED TEMPTATION by Erin Lockwood! Preorder your copy today! 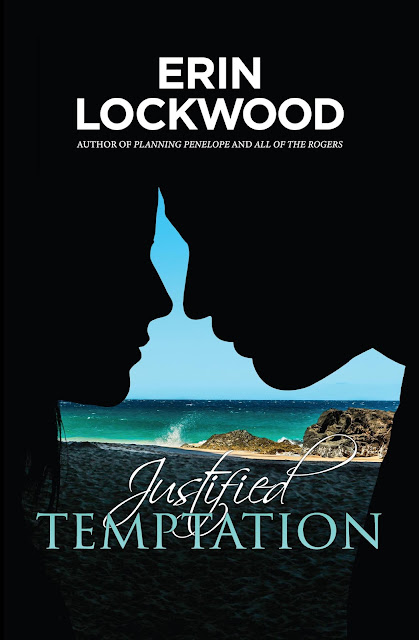 Blurb:
How long could you stay faithful?

Naomi Devereaux is the most devoted married woman in the world. Or so she thought until she is stranded on an island with the gray-eyed, masculine Guy Harrington. She loves her husband, her best friend since college, even when she gives up hope of ever seeing him again. What she’s left with are her survival instincts and her undeniable physical attraction to Guy, who provokes a sexual awakening she’s never experienced.

Even the most faithful women have a breaking point.

EXCERPT:
Guy holds his hand out for me to use him as leverage as I jump from one large rock to another. I follow him, focusing on my feet and where my next step will be. It’s not terribly high up, but it’s steep.

“This is my first time hiking.”

Guy places his hand on a large rock to his side, giving him leverage to scoot up to a higher rock. Once he’s there, he turns and offers his hand to me.

“See?” he says. “You have an adventurous side after all.”

I smile at the thought. He’s right. I love how the view seems to change with every step. I’m probably exploring territory that nobody else has ever explored before. Just Guy and me.

“So, what would you call this? A very big hill or a tiny mountain?” I ask between steps.

“For all we know, it could be a volcano,” he answers while breathing hard. He’s not just trekking uphill on his own; he’s also holding and guiding me along the way. “Let’s just call it a mountain for shits and giggles.”

I laugh out loud. “Shits and giggles, huh?”

Guy stops to smile at me. “What? You don’t like my phrases?”

Shaking my head, I say, “Mr. Harrington, you definitely have a way with words. One way or another, you always seem to get a reaction out of me.”

He turns to continue climbing up our little mountain. “Mr. Harrington is too formal. I only allow people to call me Guy.” He takes one long stride up a boulder and turns to reach his hand out for me. “Especially you.”

“Why especially me?” I ask, taking his hand and letting him easily hoist me up to his level.

“Because, as far as I’m concerned, you’re the only woman in the world.”

The rock we’re standing on together doesn’t have too much surface area on top. We’re inches from each other. His arms are wrapped around me, keeping me from falling off this small space. Our noses are almost touching, and the heat from our breaths is mingling every time we breathe out.

There’s nowhere else to look, except into each other’s eyes. I feel him wanting to be even closer. It would be so easy to give in, but I hold myself back.

“But you know that’s not true,” I say only an inch from his mouth, instantly cutting the tension between us.

He lets me go with one arm and reaches up to cup his fingers around a rock’s ledge.

“Here, scoot to the side of me, and I’ll push you up to the next rock. I don’t think we have too much more to climb. I think it gets flat at the top.”

I do what he said, moving on from that intense moment. I’m feeling proud of myself. The more I’m around Guy, the easier it feels to fall into his temptation. It’s confusing, being here with him for so long and not knowing when we’ll ever be rescued … or if we’ll ever be rescued. But I’m faithful to Charles, and nothing—not all the time in the world, not the most pristine, masculine man—can shake that. 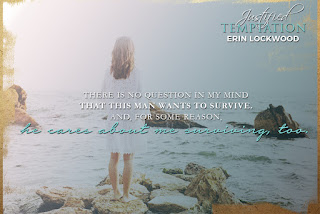 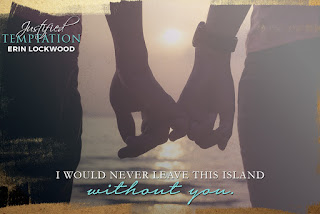 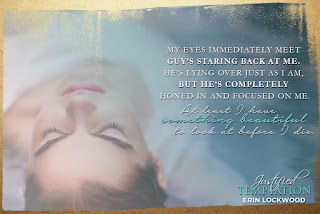 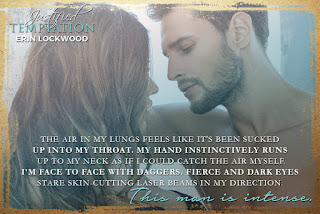 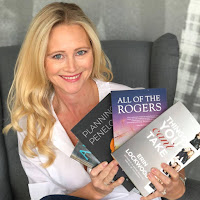 Erin Lockwood grew up in Castro Valley, California and attended the University of Oregon, where she graduated in 2003 with a degree in journalism. From there she moved to Denver and spent the next seven years searching for the love of her life and building the family of her dreams.

It wasn’t long until, with children starting preschool and more time on her hands, Erin refocused on her career, beginning with a successful entry into the world of residential real estate as a Realtor. Free time was spent reading book after book (and binge-watching the subsequent films) in the New Adult genre. Feeling hopelessly in love with her husband, she wrote him a short story leading up to their fifth wedding anniversary. That’s when she discovered her tireless passion to share her experience of falling in love through fictional characters. That story evolved into the first novel in the Angles trilogy.