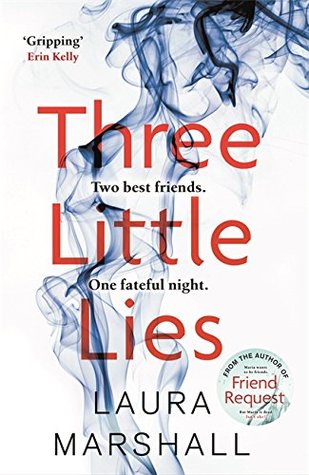 Review: Three Little Lies - Laura Marshall - June 2018
I was in the mood for a mystery thriller when I came across Three Little Lies on Netgalley. I had previously read and enjoyed Laura's debut novel Friend Request and couldn't wait to read this one. I also loved the fact that it was about friends who had lied and now revenge was coming to them and secrets/truths being uncovered. The book starts ten years ago when a family moved in next door to Ellen. The family had two boys Daniel and Nate and their goddaughter, Sasha. Ellen became quick friends with Sasha and Ellen's friend Karina joined them, but she was always a bit of an outsider and obsessed with the family especially Daniel. One NYE, Karina cries rape and tells the others that Daniel raped and became violent with her after she screamed to stop. The case goes to trial and Ellen, and Sasha takes the stand and back-up Karina's story. Daniel is sentenced to ten years in jail, and Karina moves away, and Ellen and Sasha become the best of friends and move in together. Now Ten Years Later, Ellen and Sasha are roomies, and Daniel has been released. Ellen comes home and discovers that Sasha has gone missing and believes it has something to do with Daniel and the fact that they might have put an innocent person away. Now Ellen must revisit old friends including Karina, Sasha's mother, and Leo to find out where Sasha might have gone. In doing so, Ellen will learn new truths about Sasha and that she might not have known her best friend all along. Three Little Lies was a great book with a twist that I didn't see coming. Fans of Laura's book Friend Request and Ruth Ware's The Lying Game will love.