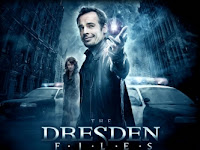 If you have just tuned into the Phantom Paragrapher , then check out the previous Dresden Books as I am reading the series :) If you are following my series of books , then readers get ready as I review Book #6 in the Dresden Files - Blood Rites by Jim Butcher.

Review: Blood Rites - Book #6 The Dresden Files- Jim Butcher- July 2010
When you first open up Blood Rites , the first chapter seems to read like something out of The Wizard of Oz movie crossed with that song One Eyed, One Horned Flying Purple People Eater as Harry of course is being chased by Purple Flying Monkey Demons which are chasing these Blessed Dogs , though for those who are very familiar with Harry Dresden - we don't really expect anything least dangerous when it comes to Harry - his name and trouble seem to go hand in hand. In Blood Rites , we read as Harry hits the world of Pornography and Erotic Films as he goes undercover to find out who or what is killing the women around film Director Arturo Genosa. He has been hired by Thomas - A White Court Vampire whom we discover their speciality of feeding is on emotions and energy. As Harry goes undercover as the Producation Assistant, we start to wonder if that is a wise idea as we all know what happens when Wizards are allowed near Technology - As the novel continues we witness as strange and odd deaths occur and then we discover the rest of Thomas's family and witness as Harry is thrown wham-bam into the middle of the White Court Family affairs. Though as it is discovered Harry may be closer in bloodlines to Thomas than anyone realised. We also meet other Vampires in Blood Rites as Harry along with Murp, Kincaid and Ebenzer take down the Red Court Vampires. This is also the first novel where Guy readers will be able to imagine and visualise Murph in a dress as she attends her family reunion and what will happen when she discovers the guy her Baby Sister Lisa is marrying is her 2nd Ex-Husband ?
Find out in Blood Rites - the 6th Book in The Dresden Files by Jim Butcher and stay tuned readers for Book #7 Dead Beat.