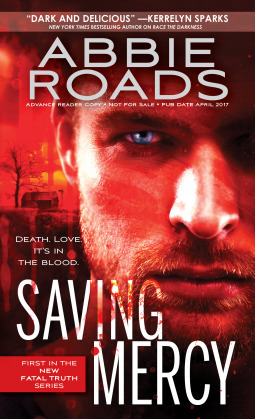 Review: Saving Mercy - Book #1 Fatal Truths Series - Abbie Roads - April 2017
Mixing up my reading genres, I move from a romance to a mystery. A few years back I read a book by Abbie Roads called Hunt the Dawn where the main character had special abilities and enjoyed the book. Saving Mercy starts with us meeting Cain Killion aka the son of a famous serial killer called The Triple K. Cain can see through the killer's eyes by playing with their blood - it has to be clean through and not tampered with. His adoptive dad Mac works for the FBI and calls Cain to help him with a murder scene. It turns out that the scene is similar to a murder his father committed twenty years ago, down to a symbol on the wall painted with blood. Twenty years ago, Cain's father killed the Killion family and left Mercy Killion - the young daughter alive. He also carved a symbol into her over her heart. Cain feels connected with her as he too has a symbol carved on his heart among his numerous scars. Cain decides to talk to Mercy when he arrives at the center, his friend Liz ( became like his adoptive mother) tells Cain to help Mercy and take her away /keep safe. Cain takes her to his cabin and helps her go through the withdrawal symptoms. The next part of the book focuses on Mercy trying to escape from Dr. Payne who is obsessed with her and Cain trying to find out who the killer is as everyone close to him is being killed and if it's not careful, the killer may come after Mac and Mercy. This book reveals a major twist that I was hoping we would meet the person known as Daught. The ending revealed a bit about Daught, this part though annoyed me as was so excited with the twist and felt a bit letdown. However, if you are looking for a good mystery featuring special abilities, then check out Abbie Roads mystery novels.