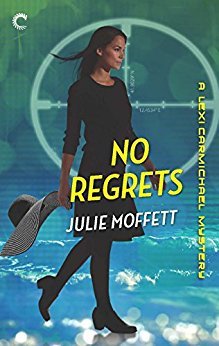 Lexi's best friend Basia is finally getting married to another of her friend's Xavier.  Everything seems to be going smoothly, which for Lexi who always seems to have the word trouble stamped on her forehead as, like Stephanie Plum, it looks to follow her. She doesn't go looking for it; it goes looking for her. Her friends and boyfriend Slash, think that she is worrying for nothing. However, Lexi's gut instincts are right as there are some strange big scary dudes at the hotel and when one of their packages gets mixed up with Basia's wedding gifts, they will do anything they can to get it back.  This hurdle eventually ends, and Basia and Xavier finally say "I DO" and are off on a secret honeymoon. While on their honeymoon Lexi is given a top-secret package delivery job and what do you know when she arrives it's on the same island and hotel as Basia and Xavier. It also is revealed that it is connected to the packages being re-routed and messed up. With having to keep this mission top secret, Lexi doesn't know who she can turn too and when things get too heated, it looks like for once she may be over her head a bit too much. Also, the book ended on a cliffhanger as somebody knows Slash's real name and where he lives. This made me want the next book as I was like oooh are we finally going to get to know Slash's real name and his background story. If you love romantic suspense filled with humor, then you will enjoy the Lexi Carmichael series by Julie Moffett