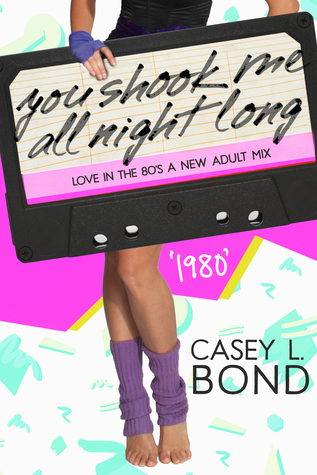 
We all have our favorite era's if we think hard about it - if someone asked you, you would be able to pick one pretty quickly. For me, I have always been fascinated with the 80's. Though I was born in 87, I grew up more on the 90's side of things, but the 80's have always fascinated me. So when I saw that there would be a new series Love in the 80's, I knew I had to purchase the books. The first of course is set in 1980, and we meet Tina and Luke. Tina is starting her freshman year at USC and has landed a party animal as a roommate. One night they are invited to a party which leads to a fight happening and Tina being in the wrong place at the wrong time. She finds herself arrested and ends up spending a night in jail. Luke is a mechanic whose younger brother was also in the fight and Luke is called to bail him out. Currently Luke has no wheels except for the red Camaro currently in his shop, he believes the owner won't mind if he borrows it quickly. Turns out though that the car is hot and Luke too ends up being arrested.  Over a night of bonding, earthquakes, and mistaken identities - Luke and Tina find themselves getting to know one another but never in their wildest dreams would think that this meeting would turn them into undercover bait for a police sting. Once everything is over, they go back to their normal lives, but is it that easy especially since Luke has developed feelings for Tina? How do you show that you love someone in the 1980s? A mixtape and music shirts that are how - with ACDC's hit song in the 1980's You Shook Me All Night Long. Fans of Romance and the 80's will love this quick read that sends us into blasts from the past.