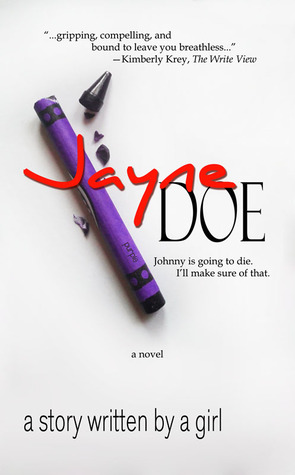 There once was a family who lived in a trailer park. A mum who was an alcoholic and had several boyfriends coming and going , three daughters - one who was a slut, one - the nicest girl around and someone who would go places and the baby of the family and last but not least - a son who a jerk and the kind of guy you expect to grow up in a trailer park. The middle daughter Jayne loved her baby sister Jill and would do anything for her; often it was like Jayne was Jill's mother despite their close age-gap. Jayne had a boyfriend Johnny who was wealthy and his family in law enforcement. Johnny, however, was a sicko, and after reading this book, I will have to warn you that you will never look at a packet of crayons especially not a purple one again. During this book, there is an incident of sexual abuse, and then it leads to death. The coroner believes that Jill died of asthma, but Jayne and an old family friend Cody who now works in Autopsy believes otherwise. During Jayne Doe, we read as Cody tries to figure out what happened to Jill and we read as Jill who is currently stuck on earth as a ghost tries to let Jayne know what her boyfriend is really like. What will happen though when Jayne ends up pregnant? Will she stay with Johnny for the sake of the baby or when his true colors are revealed will Cody swoop in to save Jayne from the same fate as Jill? Jayne Doe was an edgy book which reminded me of the book/movie The Lovely Bones where the one who died was still able to walk the earth till her killer was caught.  If you are in the mood for a crime/mystery read, then check out Jayne Doe by Jamie Brook Thompson today.