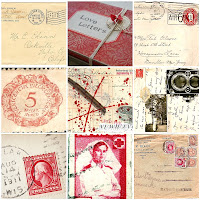 In the mood for some good ol' fashioned letter writing ?

Review: Airmail- Naomi Bulger - March 2011
Do you miss the days of letter writing ? Before the time of emails and textes ? A time where it was the norm to sit down and write long letters to each other. I know I used to be a huge fan of writing letters, though I too haven't done it in years. The lovely writing paper , the cute pens and the different colours. In Airmail, it takes us back to a world where letter writing is again a live thing . In a way this reminded me of The Lake House, where they start writing letters to us. Airmail is like a penpal novel for adults. Our two main characters are from different worlds - we have our male character known as GL Solomon , he is a hermit of sorts and lives in Sydney Australia , the other is a woman named Anouk , she is living in New York and comes across as someone who should belong in a mental institution. The story starts when GL Solomon recieves a letter in his Sydney mailbox from Anouk and soon the two of them start corresponding back and forth. Soon GL becomes so entranced into Anouk's world that we see him making a decision that for him is so out of the ordinary. Read as we discover who Anouk really is as GL decides on a whim to go to New York to find her .
A novel that in places reads a bit odd and normally would not have been something I would have picked up but in other circumstances , the story was written well and reminded me of the black and white film festival movie Mary and Max.